Home values in the Phoenix Arizona Metropolitan area continue to rise! We’re all excited to see an increase in home values of close to 22% from the prior year (July 2012 – July 2013). It’s great to finally see home values march forward to where we want them to be.
The low point in values was officially August 2011, and since then values have increased 40% since the low point. I know what we’re all thinking… Oh, if I only would have purchased a bunch of homes August 2011! But the truth of the matter is, not many people could make that purchase in 2011.
Monthly price increase of home values in the Phoenix Arizona Metropolitan market since July 2012 was an average of 1.6% per month. If you do the math, that means that a home with a value of $200,000 increased in value by $3,200 per month or $107 per day! Pretty incredible to think about.
Home increase rates are matching the frenzy that we’ve experienced – and you might remember- in July 2004.
Statistically, this means that the slope of the line values of values for July 1013 is the same as it was in 2004.
For the western part of the United States, the city of San Francisco in the sunshine state of California is experiencing the greatest rise in home prices with a 29% gain from July 2012 to July 2013 and an increase of 35% from the Low August 2011 prices, as you can see on the chart. 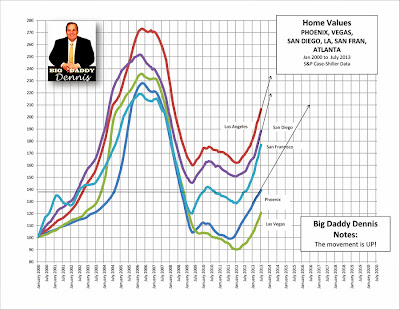 What’s the best part of the home value growth? We are so happy to say that since August 2011, the increase in home prices have been constant with out any pull back, meaning the growth of the market is strong and will continue getting stronger.